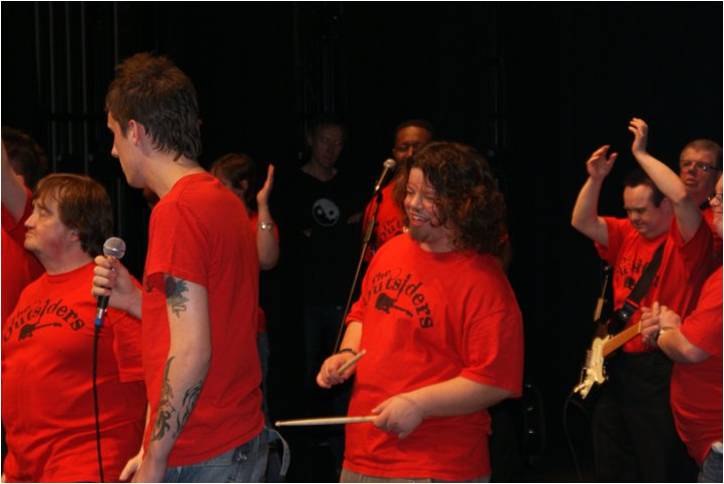 The Outsiders are a group of people (various ages) with learning disabilities in the North of England who have organised themselves to form a band. The concept was originally invented by Imagineer, a social enterprise company in Leeds who specialise in delivering person centred support, when they worked with young people who had a common interest in music.

During 2010 the original band members secured funding from charitable organizations and donations to purchase the equipment they needed and performed 7 times,  including Seven Arts Centre in Leeds and the Carriage Works Theatre in Leeds

In 2011 all the band members got approval to pay for the running of the band through their personal budgets, which includes paying for sessional support workers to support them in running the band, organizing rehearsals and gigs. The group pay an agreed contribution each week and agree how the money will be spent. They are supported to manage the budget and Imagineer staff help to keep the accounts. They rehearse regularly and often travel throughout the UK to perform. Highlights of 2011 included:

In 2012 the band performed at over 30 gigs, wrote two more original songs, prepared for their debut album full of original material and performed at the first ever Disability Rocks festival.

In 2013 The Outsiders will be expanding their range of merchandise, playing at even more festivals and plan to get back into the studio to release their first album.

The group regular discuss how things are progressing, during breaks at rehearsals, and  talk about what is working well and what perhaps needs a bit more attention.

You can read about their individual stories at  www.imagineer.org.uk or learn more about the bands plans at www.the-outsiders.info/.

The Outsiders are utilizing the Kickstarter platform to raise funds for their first album release, you can support them here http://www.kickstarter.com/projects/569891151/the-outsiders-band-leeds-disabled-adults-first-cd and be one of the first people to receive a signed copy of their album.

Back to pooling examples